Notes from the Greenwood: John Winstanley’s "An Invitation to Robin Hood" and "Robin Hood’s Answer" (1742) 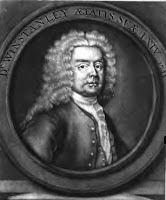 Rosemary Mitchell argues that during the eighteenth century, artists and writers when representing the medieval period did not strive for historical authenticity but instead sought to present a neoclassical or Shakespearean view of the past.[1] Classical imagery is present in some literary representations of Robin Hood from the eighteenth century. In a previous post for this website, it was pointed out that Joseph Addison (1672-1719) thought that Robin Hood was equal to classical heroes such as Achilles and Caesar.[2] The “classicisation” of Robin Hood is even stronger in two mid-eighteenth-century poems entitled “An Invitation to Robin Hood” and “Robin Hood’s Answer” (1742).

These two Robin Hood poems appeared in John Winstanley’s Poems Written Occasionally, Interspersed with Many Others by Several Ingenious Hands (1742). Winstanley (c.1677-1750) was born in Ireland, but he is a minor figure in the eighteenth-century literary world, and virtually nothing is known of his life.[3] However, there is a good chance that the poems were not written by Winstanley, as the subtitle indicates that several writers contributed to the volume. His collection should therefore be viewed as one of the many poetic miscellanies that were published throughout the period. As Robin Hood scholars are unlikely to have come across this poem before, it is transcribed below in full. The original spelling, italicisation, and capitalisation of each word in the original book are retained, with the exception of long s [∫].

“An Invitation to Robin Hood”

SIR, Thursday next, the Archers dine,
On Round of beef, if not Sir Loin;
Though Round suits best, at B—r’s House,
A Glass to drink, and to carouse,
And is, to Marks-men, you’ll allow,
For each his Arrow, and his Bow,
Much fitter to determine Lots;
The Center shewing nearest Shots:
The Day then, Sir, to celebrate,
And crown each Archer’s lucky Fate,
The Muse your Company bespeaks,
To shoot, at least, for Ale and Cakes;
And, Sir, whoever wins the Prize,
To do him Justice to the Skies.

Untouch’d by Phoebus’ scorching Rays,
And his poetick Fire,
Victorious Laurel, not the Bays,
Is all my Soul’s Desire.

Soon will the rash Apollo know,
The Danger of inviting,
An Archer armed with his Bow,
And Impliments for fighting.

The Round of Beef with all it’s [sic] Charms,
Will small Protection yield,
Against an Archer’s conquering Arms,
Tho’ turn’d into a shield.

His Butt he’ll make it, which shall feel,
The Marks of his Disdain,
His Arrows tipt with Blades of Steel,
Shall pierce thro’ ev’ry Vein.

The Vict’ry gain’d, he scorns to boast,
For gen’rous Deeds renown’d;
Then to the Round around we’ll toast
‘Till all the World turns round.

Image Credits: Frontispiece to John Winstanley’s Poems Written Occasionally (Dublin: Powell, 1742). Digitised by University of Michigan and Made Available via The Internet Archive.

Robin Hood Scholars: IARHS on the Web publishes short research notes, book reviews, and CFPs that are of interest to scholars of the Robin Hood tradition and outlaw studies. If you would like to submit an item to the blog, please contact one of the Editorial Administrators to start a discussion.

Dr. Lesley Coote (L.A.Coote@hull.ac.uk) is Lecturer in Medieval Studies and Medievalism at the University of Hull, UK.

Dr. Valerie B. Johnson (vjohnso6@montevallo.edu) is an Assistant Professor of English at the University of Montevallo.

The Bulletin of the International Association for Robin Hood Studies is a double-blind peer-reviewed open access digital journal. Scholars are invited to submit articles or essays detailing original research on any aspect of the Robin Hood tradition. Submission is digital at the web site; for preliminary queries or questions, contact the journal editors Dr. Valerie B. Johnson (vjohnso6@montevallo.edu) and Dr. Alexander L. Kaufman (alkaufman@bsu.edu).